Becoming the best me I can be

I am so happy! I have been busy so I didn’t get a chance to post this yesterday but our little Peanut is gaining weight! She had gained 4 ounces at her nurse weigh-in last Monday. She was weighed again yesterday and she gained another 8 ounces! That’s 8 ounces in one week! It’s the most she’s ever grown in such a short amount of time. Peanut now weighs 12 pounds 12 ounces! Woohoo! I can’t express how happy and excited I am!

Peanut also grew longer so she’s up to 25 inches long. Her doctor was very happy with her progress. He says we are going great, said he is proud of us for doing everything he says and told us to keep it up. He said it looks like her medicine is working like it should be. Her doctor told us we could still go the aggressive route and take her to the GI doctor or we could wait, see how she is doing and redo the stool test in a month. Hubby and I both said we would rather take the less aggressive path since she’s so young. The doctor said he was glad and believes its the better option. I am just so happy she’s growing and doing so much better. I am A LOT less stressed now. Wootsies!

We are so happy she’s doing good. Can’t you tell?

We love our little girl so much.

My little Peanut has a peanut allergy. I have jokingly been calling her the AntiPeanut since we found out on Friday. But all joking aside, I am very cautious and uncertain of what this peanut allergy means for my baby girl. Obviously, she has never tried peanut butter or peanuts. She’s only 7 months old and way too young to try it. I had been eating peanut butter and foods containing peanuts while I was nursing her up until we found out. I am very very very glad I didn’t have to find out she had a peanut allergy by giving her peanut butter. That is one situation I will gladly avoid.

But I am left with so many questions I want to ask her doctor, including questions I don’t think he can really answer. Questions like:

These questions are only a few of the what feels like thousands of questions floating around in my head when it comes to her allergies, her health, her weight gain issues, and all the other issues we’ve been having lately. I am just so worried for her. A peanut allergy is a very serious allergy to have and can be very scary. I have heard the horror stories of children with severe peanut allergies and the problems that have arisen from it. I just don’t want my baby girl to deal with that. I am hoping her allergy isn’t severe and it doesn’t get worse. I am only hope and pray. 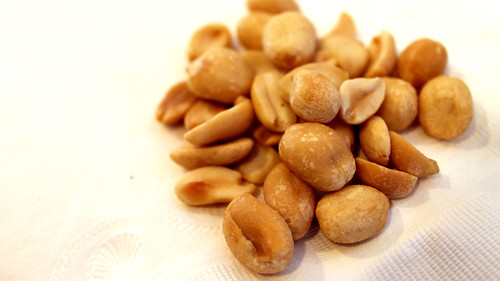 Monday was one of the worse days I’ve had in a LONG time!!!! I’ll try to write this post without crying. We’ll see.

I woke up on Monday to the simultaneous sounds of a jackhammer and my crying 6 month old (who was startled by the jackhammer) at 8:10am! They are putting in a gas line to the church next door to my house. The church which is only FIVE feet away from the side of my townhouse. The construction began right outside my daughter’s bedroom with them using a jackhammer. The construction (and the noise!!!!) continued until 3pm! The noise was so loud there wasn’t a spot in my 3 bedroom townhouse where she could sleep through the noise. This meant I had a very tired baby who could not fall asleep. I bundled her up in her stroller and decided to take a long walk where she could sleep in the stroller. Unfortunately, it was FREEZING outside and I only made it three blocks away from my house before we had to turn back because I didn’t need a tired and sick baby.

The construction stopped for the day at 3pm (around the time Hubby gets home from work). Peanut had a doctor’s appointment at 4:20pm. So when the noise finally stopped for Peanut to be able to sleep, we had to get her dressed and leave for the doctor’s. I had one cranky little girl. We get to the doctor’s office. Peanut is stone-faced with exhaustion. She isn’t a crier even when she is super cranky as long as you don’t agitate her. The exact thing we did to her during her appointment by unchanging her, weighing her, getting her length, etc, etc, etc.

Now I haven’t posted much about her weight/health yet because I haven’t been too concerned. Peanut was 7 lbs 1 oz when she was born and she’s had a slow weight gain. She’s a petite little girl though. That’s what I told myself and everyone says the same thing. We have been taking her to the doctor’s every two weeks for a weigh in to make sure she is gaining weight. We began feeding her solids at 5 months because the doctor said it would help her gain more weight. Peanut is in the less than 5 percentile for her weight but she has been gaining weight and length each time she is measured…. until this doctor’s appointment. Peanut is going to be 7 months old next week and she weighs 12 pounds. That’s it. Just 12 pounds. She didn’t gain any length either. She is currently eating solids at breakfast (3-4 Tbsps of rice cereal with a fruit), lunch (fruit or veggie) and dinner (3-4 Tbsps of rice cereal with a veggie), PLUS breastfeeding 8-10 times a day. So not weight gain is not for lack of food. We feed her when she is hungry, which is pretty often.

The doctor said there are two possible reasons for her not gaining weight. The first possibility is my breastmilk isn’t high enough in calories to make her gain weight. This could very well be true but I find it hard to believe its the only problem since she also eats plenty of solids. The second possibility is Peanut isn’t absorbing the nutrients properly causing her to eat a lot but not gain weight. There are several reasons why she wouldn’t be absorbing nutrients. We have to take Peanut for blood work to see if/what food allergies she has and check for any indications of why she isn’t gaining weight. Plus I have to take stool samples to check for blood in her stool.

Hubby and I are both worried sick about our baby girl. It took everything I had not to start crying in the doctor’s office. No parent wants to hear a doctor tell them their child is malnourished especially when you are feeding your baby plenty of food. I can’t help feeling like this is my fault. Either my milk is not enough for her OR she has inherited my stomach issues. I don’t even know what my stomach issues are and to have the possibility of giving it to her is devastating. The car ride on the way home was pretty silent between my husband and myself.

Apparently, Peanut decided to cheer us both up. She was babbling to herself on the way home. She paused. Then said “Mama” clear as day. Hubby and I looked at each other surprised. Hubby said “I just heard her say Mama. Peanut, did you say mama?” We both said mama a few times and waited for a response. After a while, we stopped and started staring out the window again (well, Hubby paid attention to driving LOL). Then Peanut said “Ma ma” again. We both heard it clearly yet again! She said mama twice!!!! It made us feel a little better.

The doctor suggested we try supplementing with formula to give her added calories. We have strong reason to believe she is allergic to milk (she gets a rash, diarrhea, crankiness, and doesn’t sleep when I use to eat dairy). So when I gave her dinner, I mixed soy formula in with her rice cereal and sweet potatoes (she doesn’t take a bottle and I mixed it with water than used to formula to make the rice cereal). After eating her dinner, she was still exhausted from not taking a nap all day. I took her upstairs and put her to bed. It was around 7:20-7:30 so I figured she would sleep for the rest of night. Just wake up to breastfed and go back to sleep.

Our day managed to get even worse when I heard her crying at 8:15pm. At first, I assumed she was still hungry and wanted breastmilk. I walked up to her crib. She was crying hysterically and was covered in vomit. Not a little… A LOT of it. She was covered, her clothes were covered, bed surrounding her was covered, all of it. She rarely throws up so she was really upset. I trying soothing her as I called for Hubby. He came up grumbling until he saw her. We stripped her down and I started giving her a bath. She threw up again while she was in the tub. She threw up all over herself, my arm and into the bath water. I yelled for Hubby. He came running and we cleaned it up. She seemed better and we even got a weak smile out of her. Then she threw up again when I tried getting her dressed. Yet again, all over my arms. I told Hubby I was going to call her doctor. I called the doctor’s office, talked to the receptionist and waited anxiously to have him call me back.

I felt so bad for her, not to mention worried out of my mind. She has only thrown up a handful of times. It was never like this. She threw up a lot each time. While we were waiting for the doctor to call, she threw up again. It had been a half an hour so I called the office again. I was fully prepared to take her to the hospital if he didn’t call back soon. Fortunately, he did call me back right away. He asked a bunch of questions. The doctor said since she wasn’t running a fever, wasn’t vomiting without stopping, she didn’t seem in pain and she managed to play in between throwing up, she would be fine. He said she might throw up a few more times to get the formula out of her system and we should just keep a close eye on her and call if anything changed.

She threw up one more time. By that point, she was so exhausted from the long, terrible day, she fell straight to sleep after cleaning her up and laying her back in her crib (after we cleaned it up, of course). I checked on her throughout the night but she didn’t have anymore problems. Thankfully!

I am so worried about her. She is such a happy, little baby. Even between throwing up, she was trying to smile at us and was playing. She’s right where she should be developmental-wise and she’s never had a cold or been sick yet. Other than not gaining weight, she is doing wonderfully. I just want my baby girl to be okay. Thanks for letting me rant and worry! I just needed to get this over my chest.